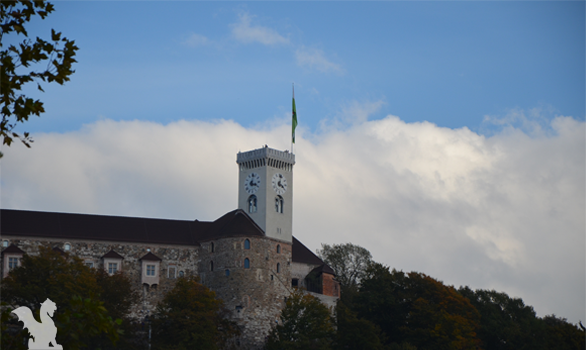 capital. No tourist who comes to Ljubljana can overlook the castle hill, from which the

Ljubljana Castle watches over the city. Throughout history, the castle has undergone many

transformations, which have, during different periods of time, changed its role and

Ljubljana Castle boasts over five centuries of rich and turbulent history. The archaeological

findings on the castle hill have confirmed the presence of a late Bronze Age settlement.

Throughout history, the castle changed its external appearance, but at the same time, it also

changed its role and importance for the capital over which it dominates. In the 18th century,

the castle almost met its ignominious end, when the Habsburgs, the then owners of the castle,

decided to abandon it, but the protests from the Carniolan Provincial Estates prevented them

from demolishing it. One of the highlights of the Ljubljana Castle history is the year 1905

when Ivan Hribar, the then mayor of Ljubljana, bought the castle, and the castle became the

property of the city of Ljubljana. Since then, the castle has become a thriving cultural centre,

while maintaining its central role in the city itself.

From its beginnings to the present day

Ljubljana Castle has a rich and diverse history. Its beginnings date back to the early Bronze and Iron Ages, which marked the beginning of human settlement in the Ljubljana basin. Due to its geographical location, the castle hill was a perfect place for establishing a new settlement, which was inhabited by the settlers who buried their dead in urns. Due to various modifications and construction works throughout history, the image of the original settlement has remained relatively unexplored.

The castle hill also played an important role during Roman times. Archaeologists believe that the Romans built either a military post or even a temple on the hill. The city of Emona was also encircled by a wall, but in the 5th century, the Huns invaded the city and destroyed it.

The Middle Ages bring us to Laibach. In 1106, the Carinthian aristocratic family Spanheim inherited the ownership of the Ljubljana Castle. Initially, a wooden fortress stood on the hill. Findings prove that this is the oldest built fortress, dating back to the Middle Ages. Ljubljana Castle was first mentioned in the 12th century in a gift document, which is now preserved in the Udine Chapter House, and from it, we can conclude that the castle was also used as a residence.

In the 15th century, the castle fell into the hands of the Habsburgs. Because of Turkish invasions, the castle was heavily fortified. The fortification was adapted to its new purpose, i.e. the protection of the city.

The castle survived a devastating earthquake in 1515, and later also the revolts of the oppressed peasants. Most of the castle structures were built in the 16th and 17th centuries. Later, the castle was used as a military warehouse, barracks and military hospital. Until the end of WWII, the castle was also used as a penitentiary.

A place for culture

When the mayor Ivan Hribar bought it, the castle became not only a place for different cultural organizations but was also partially converted into apartments. A complete renovation began in 1963 when the last of the residents left the castle. Today the castle retains its central role and breathes with the city. During the last few years, the castle has become an essential venue for a wide variety of cultural and social events.