An introduction to Ljubljana 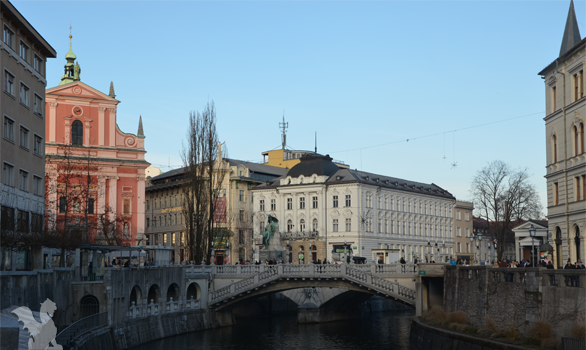 In recent years, Ljubljana has become increasingly popular as a European tourist destination and Slovenia’s capital has a lot to offer visitors, despite being one of Europe’s smallest capitals. The city is cheaper than many other European cities, it boasts a lively youth and student culture and a wealth of beautiful buildings and imposing monuments. It is easy to reach, with direct flights from London, Paris, Frankfurt and several other European hubs.

The city is also relatively compact, making sightseeing easy and convenient and there is an excellent bus network, connecting all areas of the city, as well as most areas of the country. A pre-paid card is needed to ride the bus, and these are available from many outlets around the city. However, walking is the easiest way to see Ljubljana, especially the narrower streets and alleyways around the old town. Walking tours are also offered by the tourist office. One of the best times to visit is between July and September, when the country’s largest festival, the Ljubljana Festival takes place, attracting dozens of international performers.

According to legend, Ljubljana city was founded by the Argonauts 3,000 years ago, as they passed through the area with the famed golden fleece. Over the centuries, the city has been occupied by the Romans, Slavs and Habsburgs, all of whom have left some mark on the city. The coming of the railway in the middle of the 19th century led to growth and ensured the city’s prosperity. Today, it is the political and economic center of the country.

The center of the city is the charming old town area, with its many medieval, neoclassical and Baroque buildings. The heart of this area is Presernov Square, a popular meeting place for locals and around the square and surrounding side streets there are plenty of cafes and restaurants. Many have outdoor seating areas and make a great place to sit and observe the daily life of the city. The tourist information center is located here, not far from the Triple Bridge (Tromostovje), as is another popular stop, the daily crafts market. The other major square in the old town is the Old Square, or Stari Trg, and a traffic free street leads out of here, lined with bars, shops and restaurants.

There are several sights that any first time visitor to Ljubljana city should not miss. The castle which can be reached by funicular railway, offers excellent views over the city, and on a clear day, as far as the Kamnik Alps. The Dragon Bridge was designed by the local artist Jurij Zainovich, and features four dragon statues that appear on the coat of arms. The National Museum of Slovenia is the largest in the country and houses a fascinating display of artifacts dating back to Roman times. Another museum worth seeing is the architectural museum’s annex devoted to the country’s most well known architect, Jože Plečnik, who lived in the building for much of his life.

Ljubljana has plenty of restaurants, ranging from the familiar fast food outlets, to good quality restaurants serving local cuisine. Many of the better restaurants are located along the river and are often crowded during the evening. Slovenian cuisine is diverse and has an emphasis in meat dishes; some common delicacies include sausages, cutlets and goulash. Nightlife is lively, with many bars and cafes offering live music. A memorable experience is seeing a performance of the Slovene Philharmonic, whose history goes back over 300 years. Metelkova City, once a military barracks, is now a center for alternative art and subculture, and is home to galleries, cafes and bars.

Home » An introduction to Ljubljana