The Legend of the Ljubljana Dragon 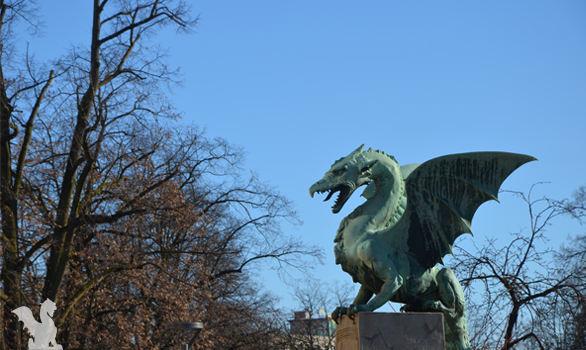 The Ljubljana dragon is by far the most recognisable symbol of our capital city. From the Baroque era onwards, the dragon is a part of the city emblem. The dragon symbolizes courage, grandeur and power. It appears on car registration plates and buildings and it stands majestically on the Dragon Bridge. It is also present in various heraldic signs. The city flag brandishes the dragon as well. To fully understand its role in the city symbolism we must know the legend of the Ljubljana dragon and its origin.

The legend of Jason and the Argonauts

The origins of Ljubljana dragon can be traced to the legend of Jason and the Argonauts. Jason was a Greek hero who stole the Golden Fleece from the king of the Black sea. Jason and the Argonauts fled on a ship called Argo to the mouth of the river Danube, instead to the Aegean Sea. They soon reached the Ljubljanica river. Since it was winter, they decided to camp near the spring of the Ljubljanica river. Near Ljubljana, they came across a large lake and a marsh where a swamp monster lived. Jason heroically fought this monster (or dragon) and finally killed it. Jason was supposed to be the first citizen of Ljubljana.

The dragon of the legend of St. George

In addition to the legend of Jason, the dragon also appears in the story of St. George, who was known as the patron of the castle chapel. St. George is often depicted in frescoes riding a dragon or killing it with a spear. The dragon symbolizes an ancient faith of our ancestors, which was later overcome by Christianity. Another version of the story tells us that the dragon evolved from an image on a medieval city emblem. The dragon as a part of the emblem remains present today on several buildings, city flag etc.

Today, the dragon is a trademark of the City of Ljubljana, a mascot and a symbol of various sports clubs in the capital and is highly popular as a souvenir. The Ljubljana dragon also appears in Slovenian tales and songs.

Home » The Legend of the Ljubljana Dragon