Ljubljana – one of the most relaxing places on earth 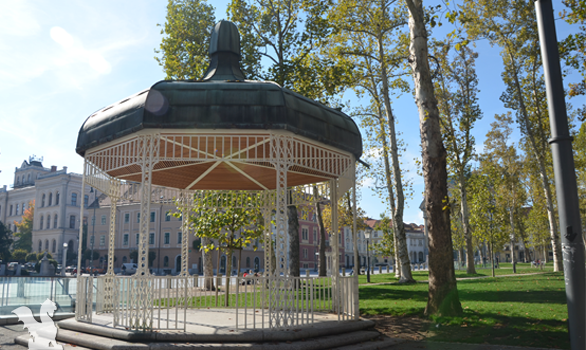 It is quite rare to come across a place that combines the grandeur of a state capital with the informality and friendliness of a village, but most visitors to Slovenia Ljubljana believe they have found just such a rarity. Although it has the impressive architecture that befits the political and economic capital of the country, it is small enough to cover on foot in little more than a day. Most of the cafes will recognize and greet the visitor as a friend by the second or third day.

The most characteristic sight of Ljubljana, Slovenia is probably the succession of bridges which span the turquoise Ljubljanica River as it winds its way through the middle of the city. The best known of these are the Three Bridges, or the Triple Bridge, which connect the Old Town with the central Preseren Square, dominated by the spectacular rose-colored Church of the Annunciation. Equally well known is the Dragon Bridge, of which the guidebook tells ladies to beware, because the dragons are rumored to lift their tails when then bridge is crossed by a virgin.

One sight that is impossible to miss in Ljubljana, is the dazzling 15th century castle, which towers over the city and is visible from everywhere. It can easily be reached on foot, by one of the many pathways leading up from various points in the city, including the Central Market and the Old Square. Lazier visitors can take the train or the funicular, but it is not a good idea to take the car, as there is nowhere to park. The atmosphere here, as in the rest of the city, is charming and informal, and it is possible just to sit and relax in the courtyard with a glass of wine, visit all sorts of museums, galleries and exhibitions within the castle walls, or ascend the tower.

There is plenty of other sightseeing to do in Ljubljana, including the Cathedral, the City Museum and the Skyscraper Building, but it would be a pity to spend the whole time rushing round with a list. One of the most delightful experiences is simply to relax and soak up the atmosphere in some of the outdoor bars and cafes along the riverbank. It is also essential to spend an afternoon cruising down the river, and at least a morning pottering in one of the markets. The biggest is in Vodnikov Square, where you can find not only all sorts of food, but souvenirs and handicrafts. There are also many wonderful shops in the Old Town, for unique crafts and gifts to take home.

For visitors who can bear to tear themselves away from the city, there are lots of fantastic day trips available. These are all very easy, as the city is in the middle of the country, so distances are short. One of the most famous and spectacular is Bled Lake in the mountains, one of the country’s top tourist attractions. This is a very comfortable day trip by train. It is also very easy to spend a day on the Adriatic coast, at charming little seaside towns like Isola or Pirano. One of the most exciting excursions is to the caves of the Kras region, particularly the colossal Skocjan caves, which are a UNESCO world heritage site.

Many people who visit Ljubljana from abroad, come on short breaks, though they later often regret not staying longer. There are few places where so much heritage, history and creativity can be experienced in such a small area, without having to use up time and energy in traveling or rushing around. This probably makes Ljubljana one of the most relaxing places to visit on the planet.

Home » Ljubljana – one of the most relaxing places on earth